With many varying opinions surrounding Surrey's plans for the proposed Light Rail Transit (LRT) system, its future is up in the air.

With the Surrey mayoral election coming up, the future of the LRT has now become a campaign topic of debate. The possible changes to the plan became public discussion when former mayor Doug McCallum announced his candidacy and vowed that if he were to be re-elected, he would scrap the planned LRT and initiate a new plan to extend the current SkyTrain Expo line. His reasoning being that it is a safer, more efficient option that's been tried and tested in Greater Vancouver. In several interviews, McCallum also mentioned his prior position as chairman of TransLink and said that the SkyTrain was always intended to be the original backbone of Metro Vancouver transit.

In later news releases, McCallum appears to also have support from the City of Langley. In a closed door council meeting last year, several members had suggested SkyTrain technology “is superior to Light Rail Transit (LRT) based on the perspective of safety, travel time, reliability and potential for future extensions.” They did however also state that despite their preference of the SkyTrain, they believe the LRT is most likely to be what is actually built and were receptive to either mode of transport so long a certain conditions were met.

On the other side, Councillor Tom Gill, who is also running for Surrey Mayor, is heavily supporting the city's current LRT plans. Gill believes that it's a more scalable option for a city that is "bigger than Vancouver, Richmond and Burnaby combined." Gill says that Surrey has more unique challenges and the LRT is a more viable option to ensure that the community is well-serviced long-term.

A recent release from the City of Surrey demonstrates a more detailed map that may help silence some skeptics in regards to the LRT's long-term success. The updated map paints the picture of a more expansive plan that includes more stops and transit paths throughout the city, creating a more accessible grid pattern. 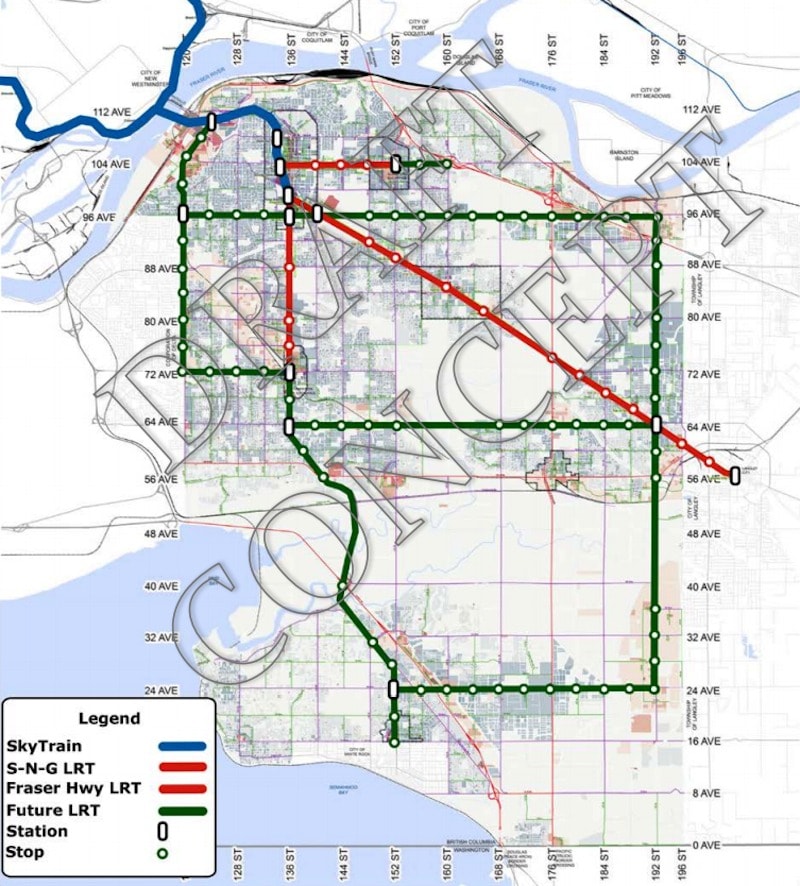 After many discussions regarding this topic, TransLink has made their position clear. A representative has made the following statement:

"Based on almost a decade of study, Senior governments have committed funding for LRT. A change like this to the plan would mean re-starting the funding and approval process at the beginning, delaying new services and increasing costs."

Even if McCallum was elected, and his proposal was endorsed by Surrey's councils, TransLink believes that it's not necessarily possible it would be adopted.

Regardless of preference, the LRT seems to be too far along to make such drastic changes, resulting in massive cost increased and huge project delays. We are of the opinion that the more expansive LRT system would allow the city to spread future density rather than congesting neighbourhoods with an expanded Sky Train. The larger grid will not only address the long standing transportation issues to Vancouver, but also drastically improve travel within Surrey. It will be interesting to see how the topic plays out in the following months leading up to the election.